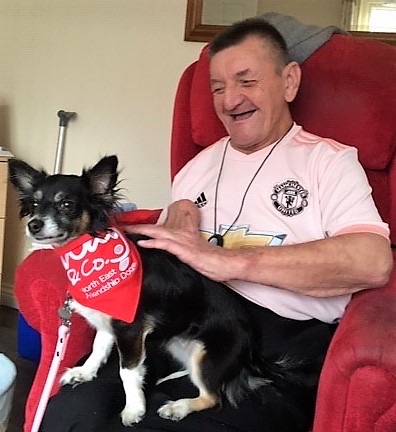 Norman originally rang us himself to ask if it would be possible to have a dog to visit as he was so sad that he couldn’t have one of his own anymore.

Norman has poor mobility and is unable to get out easily on his own.  He lost his sister and initially he lived with his brother-in-law who helped him, but since his brother in law passed away too, he’s found life very hard.

Liz and Milly are now regulars at Norman’s house.  Norman waits at the window for them to arrive and Milly waits for Norman to sit down so she can sit on his knee. He loves giving her cuddles and feeding her treats.
 
Milly loves going to visit Norman too and starts crying with anticipation when she sees the bandana.

Liz and Norman are great friends now and she’s really helped him.  Norman rarely went out, so Liz spoke to the attached care home and he now visits the residents there twice a week and he thoroughly enjoys mixing with everyone.

Liz has also been encouraging Norman to get out of his chair more to do everyday tasks.

Real friends, looking out for each other!