Points of Light is an award scheme launched by 10 Downing Street in 2014 recognising the contribution of individuals in their communities.  The fantastic efforts of Wag volunteers were recognised again last October , when on behalf of Wag, Diane became the 1,513th person to receive the Prime Ministers daily Points of Light Award.

Our team made up of Diane, Diana, Tonia and Linda accepted the award from Hexham MP Guy Opperman and Councillor Cath Homer on behalf of the amazing team of Wag & Company volunteers and supporters.  Diane said:” It’s really fantastic that the important difference Wag volunteers have been making every day since the pandemic began, to older people right across our region, has been recognised in this way.”  In the personal letter presented on the day, Mr Johnson said: ”  Your “Wag teams’ have accomplished a staggering 70,000 befriending visits and I am delighted that in this period where we have been fighting Coronavirus you have continued to provide comfort to so many through virtual visits”.

Thank you so much Mr Johnson and Mr Opperman too. We are all very proud – go Team Wag! 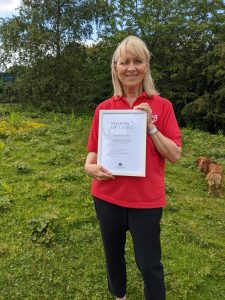